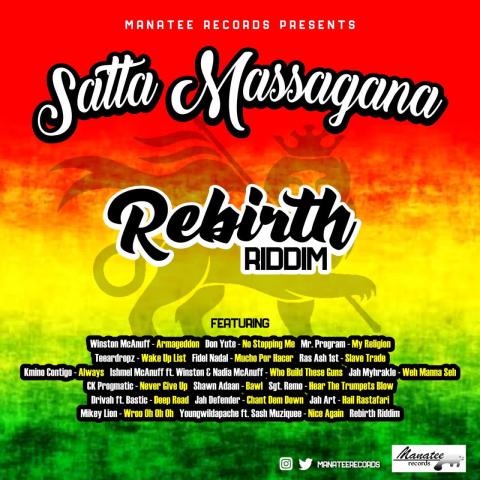 Manatee Records is thrilled to announce the launch of the all-new reggae album, “Satta Massagana Rebirth”. The album features various artists from Jamaica, Belize, Trinidad, Argentina, the USA, France, and Mexico. This global ensemble brings to the album some of their finest renditions for their huge base of global fans and followers.

The US-based independent label Manatee Records is headed by CEO Calvin ‘Doc’ Flowers of Belizean heritage. Calvin has done an exceptional job of celebrating reggae throughout his musical production career. The “Satta Massagana Rebirth” project will be included in the other many outstanding music works in his catalogue.

“The original Satta Massagana has even been adopted by some Rastafarian groups as a hymn used during services. So this project means a lot to me. The songs are well written and bring positive messages of introspection, peace and love to all”, says Calvin ‘Doc’ Flowers.

“I’m receiving a lot of positive feedback about this project. With the right promotion, these songs will do well both locally and overseas. The title of the project translates from the Amharic language as ‘He Gave Praise’. And with this project, I am honoring the spirit of that argument by giving praise,” says the President/CEO of Manatee Records, Calvin ‘Doc’ Flowers.

One of the much-anticipated songs on the project belongs to debut singer Teeardropz with ‘Wake Up List’ as well as Ras Ash 1st with ‘Slave Trade’, and Ishmel McAnuff with ‘Who Build These Guns’. The iconic reggae group, Abyssinians, first released their roots reggae album titled with the same name, ‘Satta Massagana’ which continues to be the flagship song for most Rastafarian followers today and which has been covered by most current cultural reggae stars today.

Calvin ‘Doc’ Flowers established Manatee Records in 1992. He has been involved in the music community in Chicago and Jamaica for his entire adult life. Over the years, he has supported the many Afro-Caribbean artists throughout the Caribbean and generational African artists in the USA, but also his contribution to the urban music community in Chicago has been especially important, as well as his advocacy in helping to decrease gun violence in the city and encouraging the artists in the hip hop community to push for the stars. With all the other major artists’ albums in his catalogue, Calvin is committed to release more reggae and Afrobeat music as a way to first archiving the sounds of Africa but also to teach upcoming artists the skills and marketing of the music we can call our own.