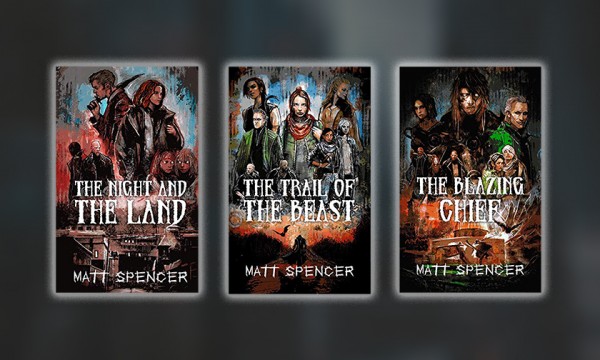 In The Deschembine Trilogy, award-winning author Matt Spencer has created an immersive, vivid world enhanced by stand-alone spinoffs like Changing of the Guards and The Renegade God. Spencer’s intricate plots and unique style of otherworldly fantasy offer readers the ultimate adventure as realms collide.

The Deschembine Trilogy begins with The Night and the Land, which chronicles the life of Sally Wildfire as she flees her sadistic family. Hiding among the squatters of Brattleboro, Vermont, Sally falls for Rob, a bristly young man freshly awoken to alien sensations and ancestral memories of a long-forgotten realm. As they hurry to unravel the meaning of Rob’s memories, the Wildfire family is cutting a bloody swath across the country on the road to Brattleboro — and they want what’s theirs.

In The Trail of the Beast and The Blazing Chief, readers delve into the ancient feud between the refugees of Deschemb, the secret land hidden beneath the surface of human society. As their conflict threatens to engulf modern civilization, a handful of humans with disturbing visions and memories seek to understand their purpose.

Reviews for this series, which is peculiar in the best of ways, are nothing short of glowing. With extensive praise for Spencer’s worldbuilding and character development, it’s no surprise that readers are enraptured by his complex plotlines. Many appreciate Spencer’s ability to build each book upon the last, while The Blazing Chief delivers an ending that fans describe as both “satisfying” and a “fantastic conclusion.”

Although The Deschembine Trilogy contains some young adult elements, it’s most appropriate for adult audiences due to unfiltered characterization and other explicit content. Fans of fast-paced narratives with dark undertones are sure to enjoy Spencer’s haunting world and deeply flawed characters. The Deschembine Trilogy is perfect for those who enjoy the work of Stephen King, Clive Barker, Joe R. Lansdale, and Anna Smith Spark.

The Deschembine Trilogy and Spencer’s other worksare available for purchase on Amazon.com or wherever books are sold.

Book 1: The Night and The Land

Book 2: The Trail of the Beast

Matt Spencer is the author of seven novels, a collection, and numerous novellas and short stories. He lives in Vermont. Check him out online at mattspencerauthor.wordpress.com, on Twitter at @MattSpencerFSFH, and on Facebook at Books by Matt Spencer. He’s been a journalist, boxer, bouncer, New Orleans restaurant cook, factory worker, radio DJ, and a no-good ramblin’ bum. He’s also a song lyricist, playwright, actor, and avid fencer.