In the post-pandemic era, the global economy is accelerating towards digitalization. As a revolutionary technology following the Internet, blockchain has triggered a new wave of craze across the globe. At the moment, the blockchain and the real economy are more and more integrated, spilling over into energy, manufacturing, medical, and even epidemic prevention, and playing a vital role in a multitude of industries.

What is the most extensive and most valuable application in the Internet era? Social applications, beyond all questions, are the answer. The social application giants such as Facebook and Tencent have stood at the forefront of the global market cap by depending on that factor. The existing social software only meets people’s needs in a shallow level, however, which fails to return the real value of users to themselves. The rights of users are deprived, and even users themselves are just a series of cashable data in the eyes of these social application giants. In addition, as for the Internet, there are many problems to be settled urgently in terms of privacy protection, information security, and asset security. It goes without saying that whoever can make good use of social value and return the personal rights of users to the users themselves can lead the new generation of social waves.

Compared with traditional Internet social platforms, a blockchain-enabled social platform is capable of encrypting and storing user information and even confirming rights by relying on its decentralization, tamper-proofing, distributed storage, and some other characteristics, which not only improves the trust between the platform and users but also truly returns the ownership of user information to users.

More and more people realize the truth and devote themselves to it.

Therefore, the presence of Mighty could not be better timed. 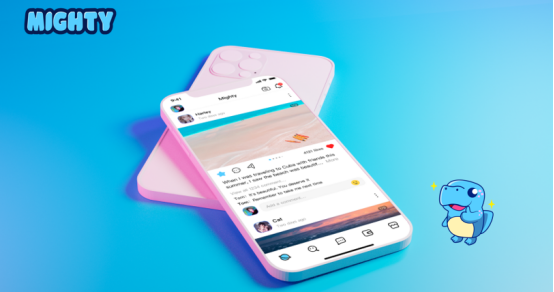 Mighty Messager, a blockchain-based social & payment network application produced by MIGHTY TECHNOLOGIES PTE.LTD. is committed to breaking down the barriers existing in the practical application of blockchain in the real world, providing users in different countries and regions with social services, cross-border payment, and business mutual assistance based on blockchain digital currency, enriching the application scenarios of both blockchain technology and digital currency, and promoting business progress and social development. “We hope that every user can reap value on the platform, and a positive cycle can be realized between the platform and users.”

The emergence of Mighty is opening a brand-new era of value, returning social value and user value to every social individual. Mighty will make groundbreaking achievements in the new chapter of blockchain-powered social applications.

The value of blockchain social networks lies in the value of financial services derived from the social platform, as well as the accompanying ecosystem-related imagination space. Relying on the nature of the traffic portal of social platforms, it is quite clear that blockchain social network is increasingly promising in constructing a social ecosystem in terms of publicity services, traffic cash ability, financial services, etc.

The essence of Mighty is not only a social application based on blockchain technology, but also a social ecosystem centered on Mighty. In the entire ecosystem conception, the social platform is only one of the entrances and application scenarios. The exact blockchain-powered social ecosystem that Mighty pursues is the integration and perfection of multiple services such as social application, payment platform, decentralized wallet, service provider platform, and some other functions.

In the aspect of social applications, Mighty provides all-around protection for chat content, protecting users’ privacy and information to the utmost. AI algorithms are also adopted to recommend interesting updates, bringing more fun to users. The community functions not only meet the needs of group chats but also supports multiple modes. Specifically, the public groups can be used for online communication in large groups with each containing up to 10,000 users, while private groups support simultaneous online voice and video for up to 1,000 people; and the anonymous mode of a group chat also makes the chatting more mysterious. 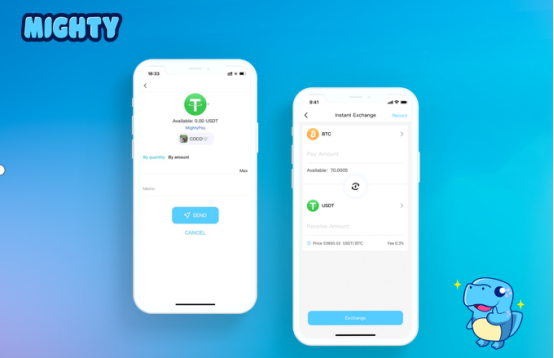 In terms of decentralized wallet, Mighty manages multiple digital currencies uniformly through a single wallet, adds support for the quick import of mnemonic phrases, and flexibly matches mining fees. What’s more, it ensures that users can hold the private keys on their own, keeping their privacy and asset allocation independent and secure.

In the field of payment platforms, Mighty supports users to transfer money in the chat window, which is convenient and instant and provides users with simple and secure exchange services. In the meantime, KYC and anti-money laundering monitoring can trace the flow of funds and restrict the flow of funds in high-risk addresses, ensuring the security of funds.

As for merchant payment services, Mighty adheres to the purpose of “Swift, Secure, and Thoughtful,” and utilizes cutting-edge encryption techniques and verification to better protect the account. An exclusive merchant backstage was built to enable merchants to manage and operate independently. Marketing and data analysis tools are provided to bind merchant accounts with personal accounts, to allow instant transfers. In addition, by depending on blockchain technology, the interconnection between digital currency payments and the real economy is realized, which contributes to solving problems existing in cross-border payments and merchant collections.

In order to smash the barriers between digital currency payments and the real economy, the Mighty platform provides BTC, ETH, and USDT payments, and more coins will be supported in the future. 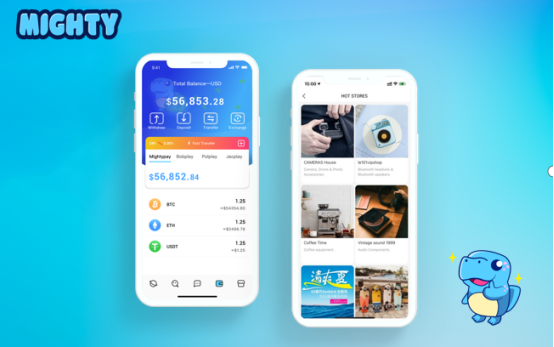 To better serve merchants, Mighty integrates the API interface provided by the platform into the service providers’ systems to provide online and offline merchants with cash collection and other value-added services. With the help of Mighty, merchants can reach a large number of users around the world, by which Mighty is capable of opening the door to business opportunities for small and medium enterprises.

With a complete ecosystem and diverse functions, Mighty is trying to growing into a “milestone” in the new era of blockchain. The powerful ecosystem formed on this basis is making Mighty the next shining pearl in the blockchain field.

“That’s one small step for Mighty, one giant leap for blockchain social network.”

In 1969, Armstrong drove the “Apollo 11” to the moon, and he delivered a famous saying to all mankind: That’s one small step for [a] man, one giant leap for mankind.

Mighty, who is looking forward to the future of the entire blockchain, also expresses such ambitious aspirations. Every solid step Mighty takes will be a huge achievement for the blockchain.

A vision of excellence is inseparable from being down-to-earth.

In the subsequent planning, Mighty Pay will add support for more currencies, such as DOGE, DOT, etc., in the application system 2.0. Meanwhile, KOLs in the community media will be introduced to produce more high-quality content. And merchant authentication function will be enabled, so as to channel more liquidity to high-quality merchants. In the application system 3.0, Mighty will provide marketing and data analysis tools to help merchants operate, and open the SDK interface to introduce third-party applications.

Soon, Mighty will have access to finance, consumption, entertainment, and other application scenarios covering all aspects of our daily lives. On the occasion, Mighty will build a complete and stable social ecosystem, building connections among people, linking the world, and leading to the future.

What new power can Mighty burst out? We are waiting to see a new future led by Mighty!