Home » Press Releases » “Once Upon a Time in the American Revolution” a must read book by Rev. Gordon Hackel

“Once Upon a Time in the American Revolution” a must read book by Rev. Gordon Hackel 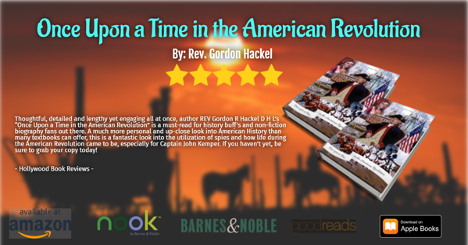 During the American Revolution, General Washington was struggling with maintaining a good spy who could infiltrate the British Army unknowingly. One of his first attempts was Captain Nathan Hale who was short-lived as a spy. He was quickly captured as a spy and hung without a trial.

General Washington had to come up with a new plan. He could not deliberately turn himself in to the British Army as a deserter without being suspected as a spy. He had to be captured while fighting for the American cause.

Captain John Kemper was the perfect man for his master spy. He had an incredible military heritage. His Grandfather, Oberest Colonel Johann Kemper fought many battles for Frederick William the Great Elector, and his son, Frederick I, King in Prussia. Also, Leopold I, Emperor of the Holy Roman Empire.

Colonel Johann Kemper had been wounded fourteen times in battles. He was awarded a pension, Governorship, and Starleck Castle in Bacharach, Germany, by Emperor Leopold I.

A strong contribution to American History. “It is a great honor to represent book like this. A one of a kind and well created book by Mr. Hackel. We are all excited and we are looking forward to find the right publisher or producer to acquire this book” as per his agent Mark Alvarez.

This author is blood-related to both Captain John Kemper and General George Washington. Gordon Hackel was born in 1949 in Hudson, New York, and was raised in Selkirk, and attended Ravena-Coeymans-Selkirk High School (RCS). He started working in investigations in Long Beach, California, from June 1966 to July 1976, and off and on from 1979-1995. He also worked for their branch office, Pacific International New Service, ot of Las Vegas, Nevada, and continued in this capacity as a major investigator until 1995. Although there were hundreds of cases, a couple of the most memorable were the following: (1) The murder and body dumped on President Richard Nixon’s Western White House lawn in Oceanside, California, and (2) the death of Charles Manson Jr., A.K.A. Jay White, while driving in his car on June 29, 1993, at the age of thirty-seven, which took place 151 miles east of Denver, Colorado.