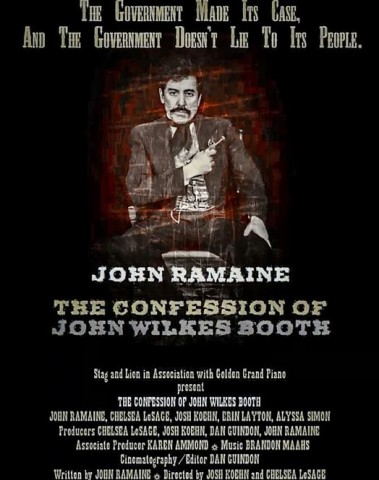 The Confession of John Wilkes Booth provides a twist that history refuses to acknowledge. It raises importance to particular events that may prove controversial. As in any retelling of history, art leads the way.

The production has received the blessing of the surviving Booth relatives, so Ramaine felt motivated to complete the project.

“Booth was an extraordinarily talented man; he is respected, loved and women love him; but he feels incomplete and dissatisfied. He wants to do something of significance, to strike, to make a difference and though he is not aware of what it is early on, this want becomes so large that when the opportunity arises to commit a heinous crime. Booth’s anger with current events latches onto the possibility of assassination without really considering its consequence. The end result is deserving and we have no pity for Booth,” stated Ramaine.

This film production stars, Chelsea LeSage, Josh Koehn. Josh had the very difficult part of John Frederick May, the doctor who was called in to identify the supposed dead body of John Wilkes Booth. Chelsea LeSage had the challenging role of Lucy Hale, John Wilkes Booth’s lover, who had to go through the devastating transition of finding out that the love of her life had killed the president. Each actor was superb in his or her presentation and interpretation.

LeSage commented, “As a director and an actor, I feel incredibly grateful that John trusted me with this story. My cast and crew blew me away and I believe that everyone who watches this film will be shocked and moved at their performances and what really happened in the life of John Wilkes Booth.”

Ramaine explained, when you write a piece like this, the voice in your head dictates how a line is to be said in a certain way. This cast of actors never disappointed me in bringing their own humanity and art to their characters. They made the text sound better than it was written.

“The story has been a long time coming. I have been sitting on this tale of over twenty years. And though it has gone through numerous permutations, this final result has proven to be the most satisfying at this point. This kind of incentive needs to be nurtured and supported,” John Ramaine.

The trailer is available at: https://www.youtube.com/watch?v=AIarItv5WOM