American rappers prove that authenticity and creativity are back with their new music video. 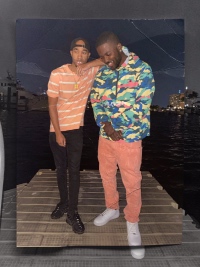 In the pursuit of creativity, there are a ton of hiccups to overcome especially when opportunities are scarce to the underprivileged ones. The success story of DeVon True & Que Tha Poet, who are now both Los Angeles-based, proves that nothing can stand in the way of passion and perseverance. Que was originally from Washington D.C.

DeVon True and Que Tha Poet have been best friends for eight years. Despite coming from different states, their music brought them together in pleasantly unexpected ways. Though, identifying their authentic style is a process that didn’t transpire easily. It has been honed with years of practice and experimentation before their music career finally prospered. Their personal stories certainly contribute to the way they present their craft.

Growing up in a family of four, DeVon knows how it’s like to struggle financially but also to continue life bravely especially when he got music as his armor. Both his father and brother are musicians so he naturally developed a knack for music growing up. His idols are Pharrell Williams and The Neptunes. Que Tha Poet, on the other hand, grew up in a family of three and has been rapping since he was 13 years old. When he heard ASAP & J Cole, he almost automatically fell in love with recording.

Today, their music is reaching many people especially with the recent release of their music video, Odyssey, which is going viral with South Korean Dancer Yool. The video that Yool created already has more than 1 million views in less than a week on Instagram. It is indeed thrilling to see dreams coming true.

To view the original video and be amazed by their rapping skills, visit https://www.youtube.com/watch?v=o_7n8OVFw_E.

DeVon True & Que Tha Poet are American rappers who have been best friends for eight years. They have developed their love for music at a young age and continue to pursue their passion to record more songs.