Home » Press Releases » Football for Friendship organises International Friendship Camp: Children from All Over the World Discuss the Nine Values of the Programme

Football for Friendship organises International Friendship Camp: Children from All Over the World Discuss the Nine Values of the Programme

Over two weeks, the Young Participants of the Ninth Season of Gazprom International Children’s Social Programme Football for Friendship (F4F), met online in the International Friendship Camp where they took part in various workshops on the topics of sport and social cooperation.

The overall theme of the camp was “Uniting friends – uniting the world”, and the children and young people aged 12 to 14 years from over 200 countries exchanged their views and experiences on the Nine Values of F4F: friendship, equality, fairness, health, peace, devotion, victory, traditions, and honour. Irrespective of their country of origin, their gender, their ethnicity or their language, the Young Participants were able to get to know each other better and to make friends in the course of the online events on 15th-23rd of May.

During the workshops, which were moderated by adult educators, the children were involved in a variety of activities: they wrote essays on topics of interest to them, made videos about their contribution to environmental protection, and discussed the topic of gender equality in sport.

One of the activities, for example, gave the participants the opportunity to present their personal definition of the value friendship. In a brainstorming exercise in groups, they were asked to dedicate the Day of Football and Friendship 2021 to a particular event. The results of every team were handed over to tutors and Young Journalists, who selected the best options. In the next step, the participants were asked to share with others their personal stories of friendship.

With regard to the value equality, some girls talked about how, in their football teams at home, they were often not taken seriously at first by the boys and that they had to work twice as hard to gain recognition and to show that football is not just a men’s sport.

David Sargent from Ireland talked about biodiversity and mentioned the problem of bees dying out in his region. To help save the bees and to provide them with food, he created what he described as small bombs, made of clay and nutritious soil with seeds of wild grasses and flowers for making honey. He drew attention to the dangers to which bees are exposed and emphasised how important bees are for sustainable development.

32 Teams of Friendship with players from more than 200 countries will be taking part in this tournament. The group stage, which involves matches in eight groups, will be played on 24th and 25th May, with the final on 29th May. The teams, each of which have six players, are named after animal species that are at risk of extinction like “Chinese alligator”, “Red-legged crow”, “Dusky shark”, “White rhino”, “Pallas’s cat”, “Star-nosed mole”, “Woodland owl” and “Western long-beaked echidna”.

Shahriyar Ahmed Mahir, Bangladesh, Young Journalist, aged 14 years: “To be honest, as a journalist of F4F, I wasn’t expecting such a high level of quality and public support from this game; it’s amazing. F4F World is a game which unites us – young players, fans, friends, team members – and most importantly it unites our old memories of F4F seasons held offline. Truly, F4F World is uniting us again, and uniting the world!” 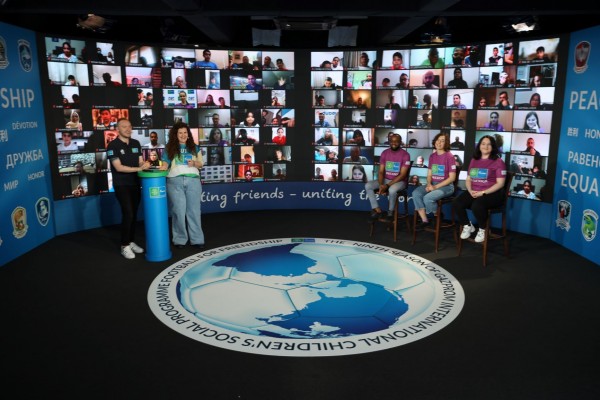 Dominic Kremberger, Sweden, Young Player, aged 12 years: “I have always wanted to be a football star and, therefore, always followed big stars, analysed how they move and behave on and off the field. My cancer disease did not change my madness for football. However, I haven’t played the game for a long time. Anyway, I hope to be back on the field and to be a goalkeeper instead of being a player. I have accepted how the cancer has changed my life, but I am grateful to be able to play football again soon. This is my goal now.”

About Football for Friendship

In 2020, Football for Friendship took place for the first time in an online format. More than 10,000 players in all age groups came together on a specially developed digital platform which became a stadium for international children’s tournaments and a virtual training ground for everyone. The participants in Football for Friendship were able to join international and mixed teams and to play their favourite sport, football, without leaving the comfort of their home.

Young participants from over 200 countries taking part at International Friendship Camp of F4F.