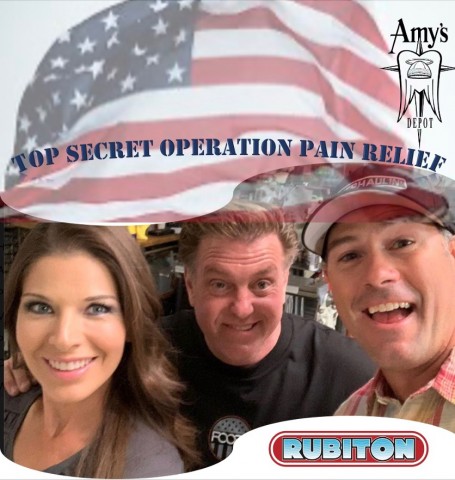 Hot rod designer Chip Foose is on a top secret mission, making a special appearance at an upcoming surprise location to honor our service men and women in honor of Military Appreciation Month this Memorial Day weekend, joined by his “Overhaulin’” co-stars, Adrienne Janic (A.J.) and Chris Jacobs.

Foose and his Overhaulin’ co-stars will spend the day as special guests at a secret military location, showing their appreciation for our women and men in uniform, past and present, signing autographs, posing for photos, and passing out free gifts. Foose will also be the surprise judge for a planned car show, and will showcase one of his famous rebuilds at the special military event.

RUBITON™ Pain Relief is an event sponsor of “Operation Pain Relief,” continuing Foose’s goal to donate almost $500,000 in free pain relief to help “stop the pain and start the cure” to help launch his new charity, Amy’s Depot, in memory of his sister, Amy Foose, who died at the age of 16 of a rare genetic disease.

Free giveaway donations of the pain relief cream have been made to children’s organizations, homeless shelters and veteran’s groups in Southern California in support of Amy’s Depot. Tens of thousands of dollars were raised for the charity at a recent South OC Cars and Coffee car show last month – with more fundraising events on the horizon.

The popular TV series, Overhaulin,’ ran for a total of 9 seasons, and Foose and his team overhauled more than 100 vehicles.  The franchise recently returned on the MotorTrend app, and  is now back in production. Overhaulin’s 10th season is coming to MotorTrend On Demand on November 16, only on the MotorTrend app, back with 12 new radical restorations car enthusiast s are sure to love.

Foose is the youngest member ever inducted into the Hot Rod Hall of Fame in 1997 at age 31. Honored with over 30 prestigious automotive awards, in his 30+ years in Automotive Design, Foose has designed and built over 170 automotive dreams, including internationally known vehicles. Today, he continues to design and build automotive masterpieces.

He founded Amy’s Depot to raise funds and awareness for Progeria, or “Rapid Aging Disease,” the rare, painfully debilitating, terminal childhood disease that took the life of Foose’s youngest sister, Amy, and to help make the world a pain-free place for all!

“This is to help raise awareness and funds in memory of my sister, Amy,” said Foose. “She had a disease called Progeria, which is Rapid Aging. But she had a heart the size of America… So what better way to honor her this Memorial Day than to honor the women and men who give so much for our country and to all of us. My thanks to A.J. and Chris for coming out to give their support and to our military hosts and everyone at RUBITON™ for helping to make our top secret ‘Operation Pain Relief’ possible.’”

For more on Chip Foose and Foose Design, visit www.ChipFoose.com

To find out more about RUBITON™ Pain Relief, visit www.RUBITON.com