Home » Press Releases » Roberto Carlos Exclusive: Global Ambassador for Football for Friendship Answers the Questions of Young Participants from all over the World

Roberto Carlos Exclusive: Global Ambassador for Football for Friendship Answers the Questions of Young Participants from all over the World

The former Brazilian international, three-time winner of the Champions League and Global Ambassador of the Gazprom International Children’s Social Programme Football for Friendship (F4F), Roberto Carlos, spoke in an exclusive press conference with Young Players and Young Journalists about his life, his career and his support for F4F

Roberto Carlos won the World Cup with the Brazilian national team in 2002. He also won the UEFA Champions League title three times (1998, 2000 and 2002) with Real Madrid as well as numerous national league championship titles. Currently, he is working as a youth coach at Real Madrid. Since 2020 he has also been a Global Ambassador for Football for Friendship. He has supported the programme since 2019, when he presented the winners of the F4F World Championship the cup at the closing events in Madrid, having taken part in other important highlights of the tournament as well.

In an online press conference at the end of May, he answered a wide range of questions from Young Players and Young Journalists with charm and wit. The topics ranged from the highlights of his career to his relationship with his family, his native country Brazil, and his support for Football for Friendship.

Asked about his most famous goal, Roberto Carlos couldn’t suppress a smile at first because, as he explained, he is often asked this question. But he then went on to mention his free kick against France on 3rd June 1997 at the Tournament of France in the 21st minute of the game and also his spectacular goal against CD Teneriffa on 21st February 1998. He also explained that the derby match between Real Madrid and FC Barcelona had always been a highlight. He said that the Brazilian national team of 2002 and Real Madrid with its galacticos were his favourite teams, and argued that whether or not football was becoming more and more commercialised depended a lot on the actual club. Overall, football would continue to develop both technically and tactically.

He told David Sargent from Ireland that it was true that he had been named after the famous Brazilian singer Roberto Carlos Braga. It had been the wish of his father, whose favourite singer this was. He, Roberto Carlos, was a great admirer of the Brazilian singer Alexandre Pires. He explained that his family had been poor and that, when he was twelve, he had wanted to become a lawyer. But then everything had quickly turned out differently: a football career in Brazil, the national team and an invitation to play in Europe. He said that his family had always supported him, particularly his father, who had played football himself. And, of course, it had been painful to leave his family when he was just 13 years old.

Kinley Deki Yangzom from Bhutan asked him what he would do differently. He replied that everything had gone well and had helped him to develop personally and professionally. He told Miriam Sheahan from Ireland that he had never been afraid. But of course he had had dreams, for example to be able to build his parents a house. 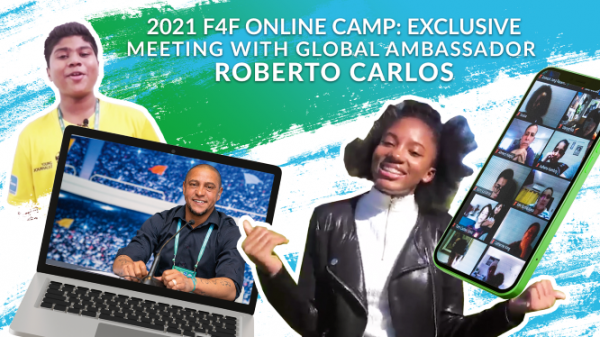 In his view, respect towards others, and good, friendly behaviour – towards one’s opponent as well – were important qualities. He told Dominic Kramberger from Sweden that teamwork was an important precondition for success. And his answer to the question from Xuance Li, a Young Journalist from China, was that, because he himself had always behaved properly towards others, he had never been offended by anyone. Mihajlo Nasik, a Young Journalist from Serbia, played Roberto Carlos a serenade on his piano and then asked him about his creative hobbies. Roberto answered that he didn’t have any special talents and that his life was taken up with football 24 hours a day, seven days a week.

Doro Yusupov from Tajikistan wanted to know what, in his view, were typical traditions in Brazil. The football star’s answer was good fortune, good food, respect for one’s family and the desire to spend the weekend with one’s family. Aahana Kamboj from India observed that Brazil had so many good footballers and asked whether it was to do with a particular kind of sand on the beaches there. Carlos replied that he had lived in India for some time and had a great love for the country. He went on to explain that the sand on the beaches most certainly wasn’t the reason why Brazil had so many good footballers. Quite simply, the people in his country played football everywhere and everyone wanted to become a star.

What he found good about Football for Friendship was that so many Young Players and Young Journalists meet up and can interact with one another. He thanked the young people for their many interesting questions and wished them all every success.

The 9th season of Football for Friendship is taking place in an online format from 14th to 29th May 2021. This year, F4F is bringing boys and girls together from more than 200 countries and regions. Young Players aged 12 are taking part in the 2021 Football for Friendship eWorld Championship (eF4F). The competition is being played on “F4F World”, the football simulator, which is available free of charge in 27 languages on MS Windows, Apple MacOS, Android and iOS.

Young Journalists report in the International Children’s Press Centre on the events in the 9th season of Football for Friendship and share with their friends the most important values in the programme: friendship, equality, fairness, health, peace, devotion, victory, traditions, and honour.

You can watch the video of this press conference by clicking the video below.

Aahana Kamboj, India: “I really enjoyed the session with Football for Friendship Global Ambassador, Roberto Carlos, where the Young Journalists from different countries asked questions related to his football career. Even I got the opportunity to ask a question. According to Roberto, teamwork is the key to success, and everyone must follow this rule to be successful in life.”

About Football for Friendship:

UEFA, FIFA, football federations and the world’s leading football clubs, international charity foundations, famous athletes, politicians, and artists support Football for Friendship. The project has received over 60 national and international awards in the field of social responsibility, sports, and communications, including two GUINNESS WORLD RECORDS™ titles for the most nationalities in a football training session in history and the most users in a football video hangout.

F4F Global Ambassador Roberto Carlos answers the questions of Young Participants from all over the world.