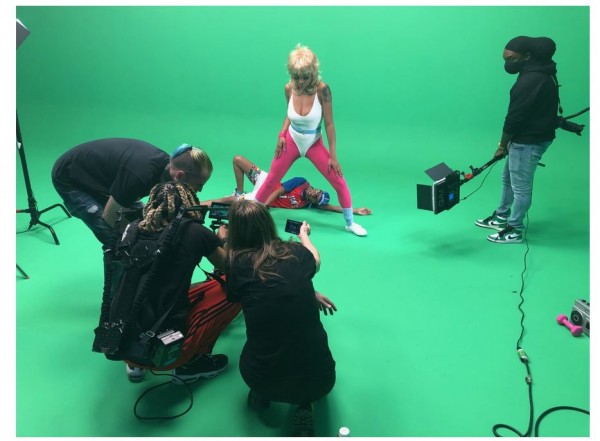 Benoit, coming off a string of successful collaborations with artists Cherae Leri and Ashilee Roberts, was excited to tackle such a unique concept saying, “I love getting to think outside the box and I’ve gotten really lucky with the alternative artists I’ve gotten to work with.”

“This was Oomy’s very first music video, so I was thrilled she was willing to trust me with my ideas. The song just really gave me an ‘80s pop vibe. Plus, Oomy has a playfulness to her that those ‘80s videos really captured,” Arma said.

“Oomy Oomy,” a hypnotic, drum-heavy R&B jam was filmed at Studio Space Atlanta and updates Olivia Newton-John’s “Physical,” The Eurythmics’ “Sweet Dreams Are Made of This,” Robert Palmer’s “Addicted to Love,” Prince’s “Raspberry Beret” and The Power Station’s “Some Like It Hot” substituting the original stars and putting Oomy in the lead.

“I really wanted for Oomy to be able to represent herself authentically, and I loved the idea of artists like Prince and Annie Lennox who already turned things like fashion and gender identity on its ear. Plus, it was fun making her the lead who gets the girl, instead of the traditional white guy hero of the ‘80s.”

Arma added, “Out of the five videos we recreated, (Oomy) had only ever heard of the Prince video. So I had fun giving ‘80s music video lessons. However, Oomy did suggest that she do the Spike Lee look and she absolutely nailed it.”

KeÁ Obsidiãn not only co-starred in each scene, but she handmade almost all of the costumes including Oomy’s Spike Lee costume. “I can’t say enough about KeÁ’s talent and hard work. We worked very closely together on each element and wow, she really nailed it. That Raspberry Beret suit she made for Oomy is incredible!”

As a director, it was both fun and challenging trying to match shots. During prep, Arma says she had a blast with set decorator Amanda Lippert hunting through the furniture at Central Atlanta Props and Sets trying to find the right chaise lounge for “Some Like It Hot,”, or the gold records for “Sweet Dreams.” Storyboards by Chris Hunter also helped keep the day both organized and accurate. On the day of filming, Arma worked closely with the director of photography, Sterling McGee, to match the shots. “We basically held an iPad or a phone up to the monitor as we went along to match framing.” For the edit, Agustina Vanni worked with Arma to get the flow right. And John Peterson at Moonshine Post really made it all work with his color correction. Finally, animator Anastasia Makin Magic worked with Arma to recreate both the animation styles of “Raspberry Beret” as well as “Some Like It Hot.”

“I am beyond excited for this video’s release. The ‘80s were a magical time for music videos. I hope to continue to bring back that kind of creativity to my work today.”