SIDUS HEROES: Why become a co-owner of the SIDUS Station Store module? 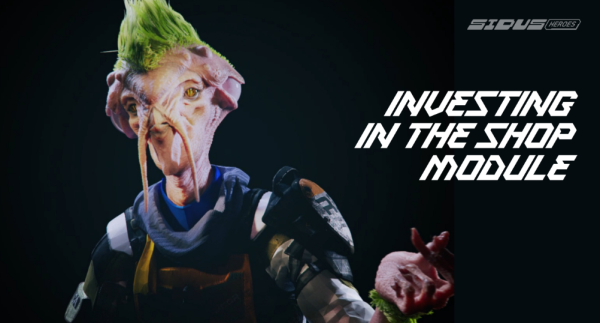 SIDUS HEROES belongs to a new type of video game that implements a Play-to-Earn (P2E) model. This concept gives players ownership rights over all in-game items and incentivizes them to play and progress through the game.

SIDUS HEROES and other games like it build up a player-driven economic system that has tangible value in the real world.

SIDUS HEROES takes this concept to another level and extends the game’s reachability by being accessible through a web browser in one click. Users don’t need to download an application onto their Android, iOS, PC or Mac to start playing. They just have to open up their browser and type in the game’s URL.

Check out this Tweet: SIDUS HEROES continues to expand its network of supporters

Investor’s Logic: Why become a co-owner of the SIDUS station Store module?

To build the Store module, users will need quite a lot of resources that they can loot from Tesseracts. After the construction is complete, all players who invested resources in building the module will receive royalties from every item sold in the Store. Their royalty share will depend on how much they invested.

Players who invest in this module construction will be entered into a Hall of Fame for this particular module. This is a record showing each player’s contribution and affects their Investor rating.

Investment Points — a conventional unit for counting the cost of each unique resource unit. For example, resources with a higher rarity will cost more in Investment Points.

Royalty — the percentage of the reward that players receive from each transaction in a certain module during the entire period of its existence. The royalty depends on how many Investment Points a player contributes during the module’s ‘collection’ stage. Royalties will be displayed in an Investor Ratings table. Each module will have its own rating value.

In the Store, players will be able to buy Lottery tickets and win the resources needed to build all additional modules. The Store will also sell unique NFTs, including Space Shuttle Toolboxes, Land, Equipment and much more.

SIDUS HEROES has developed a special royalty bonus system linked to top positions in the Investor Ratings table for players who see themselves becoming co-owners of the in-game Store.

Learn more about SIDUS HEROES through its official blog to get to know more about the game, the future of SIDUS and its plans moving forward.