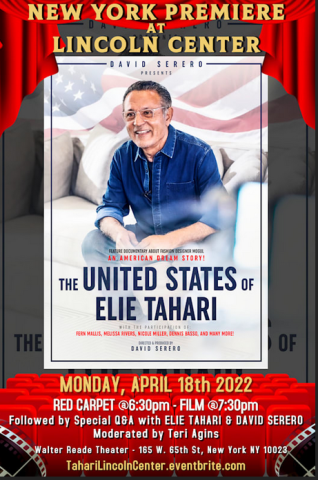 On April 18th, 2022, the film will receive its Lincoln Center premiere at the elegant Walter Reade Theater located at 165 West 65th, New York, NY 10023. The film screening will be followed by a Q&A of Elie Tahari and David Serero, moderated by fashion celebrated author Teri Agins. Several fashion personalities will be attending the red carpet set at 6:30pm. The film will start at 7:30pm.

Tickets for the screening ($20-$30) are available at TahariLincolnCenter.eventbrite.com

Fashion Designer and Mogul Elie Tahari has been living the American Dream for more than 50 years. He came to New York in 1971, from Israel, with less than $100 in his pocket, slept on benches in Central Park, and went on to build a billion-dollar fashion empire. There are thousands of fashion companies worldwide, but only three have lasted for more than 45 years globally and are still run by their founders: Giorgio Armani, Ralph Lauren, and Elie Tahari.

“The United States of Elie Tahari” is the first documentary ever produced about Elie Tahari, filmed in 2020. Directed & Produced by David Serero, this highly anticipated documentary tells the life of Elie Tahari from his birth and origins (born in Israel with Iranian parents) throughout all of his achievements and legacy. Part of the documentary is also dedicated to Tahari’s creative process and endurance in the fashion world. Several fashion personalities such as Fern Mallis (aka the Godmother of Fashion), Melissa Rivers, Fashion designers Nicole Miller and Dennis Basso, Arthur S. Levine, Wallstreet Journal Fashion Journalist Teri Agins, as well as Disco music, models, Studio 54, and more, are part of this documentary.

“In this documentary, you’ll discover the whole inspiring story of Elie Tahari and his fashion world and process, as rarely shown before. David Serero added, “I want this film to be loved by fashion lovers and connoisseurs and the ones who are not familiar with that important artistic environment. This documentary is educative, inspiring, and a celebration! You’ll feel like joining a large party! said Serero. Elie Tahari is the definition of courage, determination, kindness, and… chutzpah! His parents fled Iran and moved to Israel, where he lived in a refugee camp Ma’Abarot’, then moved to New York without speaking English and has contributed to the New York fashion life for more than 40 years with his iconic and visionary signatures such as the Tube Top, the Woman Suit and more. This film is perfect for any community but particularly for the New York, Immigrants, Jewish, Persian, Iranian, Israeli, Fashion audiences!”

David Serero commented: ”This Lincoln Center movie theater premiere is significant for me. It represents a celebration of a long year of hard work and another one touring all film festivals throughout the world. To come back to the city I love, the one of Elie Tahari, at this iconic movie theater is a dream come true.”

The Official Trailer of “The United States of Fashion Designer Elie Tahari” is available here: vimeo.com/ondemand/elietahari