Conflict within the confines of a relationship is normal, and according to most experts, even necessary for relationships to thrive. However, Andre wants couples to realize that unresolved conflicts can fester like wounds that never heal and lead to resentment, emotional disconnection, isolation and despair in which couples exist together day to day, sleep in the same bed but feel like they‘re living in different time zones.

Relationships can be both highly rewarding, yet challenging in ways many couples don’t expect. The goal, according to Licensed Marriage and Family Therapist, Andre Moore, LMFT, is to diffuse emotional conflicts and find a safer, softer place in which the two lovers can feel emotionally closer to each other.

Conflict within the confines of a relationship is normal, and according to most experts, even necessary for relationships to thrive. However, Andre wants couples to realize that unresolved conflicts can fester like wounds that never heal and lead to resentment, emotional disconnection, isolation and despair in which couples exist together day to day, sleep in the same bed but feel like they‘re living in different time zones.

The Difference between a Good Fight and a Bad Fight 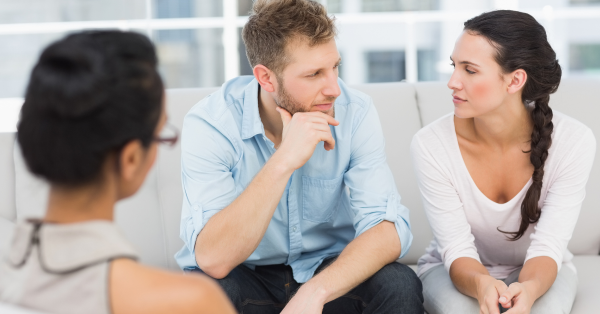 A good fight for couples always ends with improved understanding. A bad fight, like a weak scene in a movie, never gets to an emotional place in which the two antagonist lovers touch each other’s hearts. The fight just drags on until they walk away in complete despair, then come back later for another round.

In a good fight, one of the lovers shows pain or vulnerability and speaks from the heart. A good example is in the film Casablanca when Ilsa threatens to shoot Rick if he doesn’t give her the documents she needs to save Lazlo from the Nazis. Ilsa is ready to shoot Rick if he doesn’t turn over those documents. So what does Humphrey Bogart do? He looks at her with pain in his eyes, on the verge of tears, and tells Ilsa, “Go ahead and shoot me. You’ll be doin’ me a favor.” At that moment, Ilsa falls into his arms and they become lovers again. This is what is called a turning point in the argument in which one of the lovers speaks from the heart and the other is moved by his or her vulnerability.

The one thing that always leads to bad fights is a deeply embedded feeling of shame in one or both lovers that never gets expressed. Shame is a lot more powerful than guilt. Guilt is a feeling of ‘I hurt my lover, feel lousy about screwing up and want to make up for it’. Whereas shame is a lot more insidious than ‘I just screwed up’. It’s ‘I’m screwed up’. With shame, people feel like everything about them is screwed up. No matter what they say or do, they feel like James Balwin’s brother in Sonny’s Blues, always banging their head up against the low ceiling of their capabilities. Carl Jung called shame an affliction of the soul.

André likes to talk about a couple married for almost 20 years who rarely feel shame. Once a month, they have an elegant dinner well lubricated with good wine. Over dinner, they debate, following the English rules, why they should stay or not stay together. The husband enjoys taking the affirmative because the affirmative always gets to have the first and last word and he loves having the last word, as his wife is quick to remind him. After dinner, they return home and have passionate sex. Now by any measure, this older, married couple have mastered the art of having good fights, or debates as it were.

One of the most useful tools for encouraging lovers to have good fights is The Couples Dialog developed many years ago by Harville Hendricks. In The Couples Dialog, the two lovers sit down together facing each other, say for 30 minutes. One gets on stage for 15 minutes and pours his or her heart out while the other listens, mirrors, validates and empathizes, without necessarily agreeing with what the other is saying. Then they switch roles. The Couples Dialog can lead to deeper understanding and emotional intimacy. But like Yoga, it takes a lot of practice. Individuals and couples can’t just jump into Warrior 3 without first doing Hanging Dog and Warriors 1 and 2.

When to Know if a Couple Needs Counseling

Couples are in trouble when they get caught up in what The Gottman Research Institute calls the Four Horsemen of the Apocalypse. These four behaviors increase the odds of getting a divorce to 85%:

Backed by more than 80 years of collective experience, André Moore and his group have earned a reputation as a leading couples therapy and counseling provider in the greater New York area. See Andre’s 5-Star Reviews on Google.

Individuals or couples who wish to schedule a 10 minute, no obligation telephone consultation are encouraged call André directly on his cell phone at 646 239 9112 or email him at [email protected]