Sci-fi movies are mostly about robots, aliens, UFOs, or futuristic technologies. Now, how about a Sci-fi movie that involves iconic historical characters, say, Vikings, the legendary wizard Merlin, and so on? Sounds epic, right? Well, a Brussels-based veteran animation expert, Wim Tilkin (and his family) has recently launched a crazy sci-fi movie on Kickstarter that involves historical legends like Vikings, Merlin, King Arthur, and a Panda. Aptly titled “SCI-Viking”, the movie is a 30-minute-long outrageous comedy loaded with fun, action, and oodles of fantasy adventure.

SCI-Viking is produced by Tim’s family-owned and operated production company Have A Kitten.

The idea behind SCI-Viking is inspired by Wim’s medieval-themed family photoshoot (The Goron Chronicles) a few years back on his birthday that quickly went viral on social media. The photoshoot was arranged by Wim’s family to help him deal with his first-ever midlife crisis. Inspired by the success of the photoshoot, the Tilkin family decided to come up with a movie on a similar theme when Wim hit another mid-life crisis, to make things on a more elaborate level.

“We are excited to share with you the trailer of our innovative sci-fi comedy with historical characters. Science fiction movies have always been there but SCI-Viking is something completely out-of-the-box and hence uniquely intriguing”, stated Wim.

The story of the film has been written by Wim and his daughter, Saida.

“Packed with loads of action, laser guns, quirky Vikings, sword fights, magic wonders, and ridiculous humor concepts like time travel, SCI-Viking is going to be a spectacular film with complete madness. It’s  something that you will love to watch with your family and friends and experience unadulterated entertainment.”

SCI-Viking brings to the screen an epic tale of a Belgian VFX prop maker, Tim, who visits Tintagel on a holiday. Things start taking a surprise turn when Tim gets accidentally transported to the Viking era only to find himself among the Vikings, wizards, and an oppressive king from the bygone era. He also meets a young woman in a panda mascot suit by the name of Holly. Interestingly, although Tim gets flashed back into historic times yet he finds that he still has his cell phone with him- something that piques curiosity among the Vikings and also renders leverage to Tim in such a flashed back environment. And then, a spectacular adventure follows. 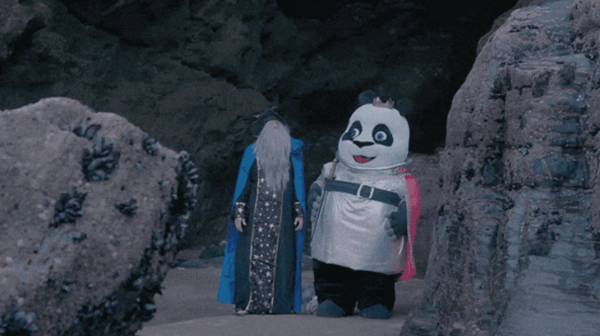 “SCI-Viking explores a unique mix of concepts that have barely been explored before. We had great fun conceptualizing the entire project and we believe our viewers too would be delighted with our hilarious and exclusive presentation. However, creating a sci-fi movie that too on a medieval theme demands robust financial backup and hence this Kickstarter campaign. Your generous support will enable us to bring SCI-Viking to life and offer you a whole new experience altogether.”

Backers will be rewarded with a mention in the film credits, exclusive access to movie links, soundtrack, and more.

To show your support for the campaign, please visit Kickstarter