Not every female musician wants to be a pop star, and they don’t have to be. Babyllon is finalizing her second studio album. The album is a collection of work she created to, “Provide a sense of strength to those who are rising from struggles.” Polina Antoni Kanin, who releases her music under the stage name “Babyllon” is set to release her new album Collide. Collide is a recent series of 10 songs that was written and produced by Babyllon; and inspired by classic rock and roll legends like Led Zeppelin, Queen, Amy Winehouse, Joan Jett, Hall & Oates with the influence of modern soul. We had an opportunity to preview the album, and it’s easy to understand why publications like Guitar World Magazine were quick to endorse Babyllon considering her one of the “Top 10 Female Guitarists You Should Know.” 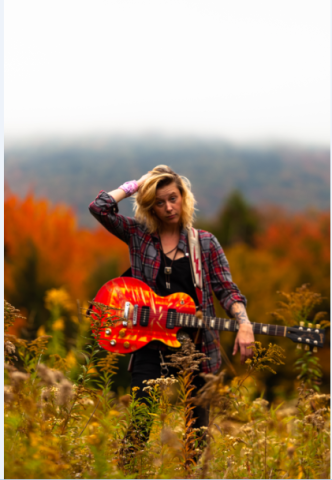 The album release date has not yet been announced. But there are two singles from the upcoming album that are scheduled to release July 15th on all major platforms. One of the singles set for release this week, David and Goliath, is the only song from the upcoming album that wasn’t solely produced by Babyllon herself. While collaborating with Grammy Award Winning Producer Jeff Jones, they kicked off recording her album by enlisting prominent talent such as Gary Foote (Motown) and Victor Jones (Lionel Riche/Drummer) to record David and Goliath.

In an interview, Babyllon describes working with Jeff Jones “The Jedi Master” as a truly surreal experience, a collaboration that was nearly 10 years in the making. She went on to mention that working with highly experienced musicians on David and Goliath set the energy for Collide, and led her to set high expectations for the rest of the album. Stepping out from the comfort zone of working with a Grammy winning producer, she had a huge obligation to fulfill her role as an executive producer for the other 9 songs on Collide. In releasing the album, she saw it fit to release David and Goliath first, as a single, giving listeners insight into where she is coming from with this new release.

Polina describes her production style as that of a “live producer”. Which is a production style that relies heavily on impulsion, emotion, and intuition. As she was stepping into this new role, Polina spent months working with various artists in New York City during their pre-production phase, helping fine tune cords and vocal arrangements for their upcoming albums. It was through this level of collaboration that she was introduced to the supporting acts that recorded the majority of Collide with Babyllon.

According to Polina, they recorded a total of 12 songs in 2 days. Well technically, a day and a half. One of the studio sessions was cut short, due to an emergency last minute filming session for PBS’ children’s show “Sesame Street.” Babyllon looks back at working with iiWii Recording in Newark as a huge opportunity to grow as a producer. She considers her production and collaboration style to be highly supportive and impactful to talent, and aspires to bring a sports coach level of enthusiasm to the studio.

The singles ”All Your Love” and “David and Goliath” are set to release on Apple Music and all major streaming platforms on July 15th. This upcoming album can be considered a precursor to Babyllon’s upcoming European Tour, you can expect tour days to be announced later this year. Now that the album has been recorded, Babyllon plans to spend her time promoting her release, and is looking forward to establishing relationships with female driven booking agencies, publishing companies, and record companies to continue her mission to impact those who feel their voices have been suppressed.