Jointly organized by Forbes China Group, Chongqing Municipal Commission of Commerce and the People’s Government of Chongqing, Yuzhong District, the 2022 Forbes China Urban Consumption Development Forum was successfully held in Chongqing from 22-23 July. The forum was one of the sub-forums of the 4th Western China International Fair for Investment and Trade (henceforth known as WCIFIT), and the theme for this year was “New Vitality of Consumption, New Dynamics of Cities”. 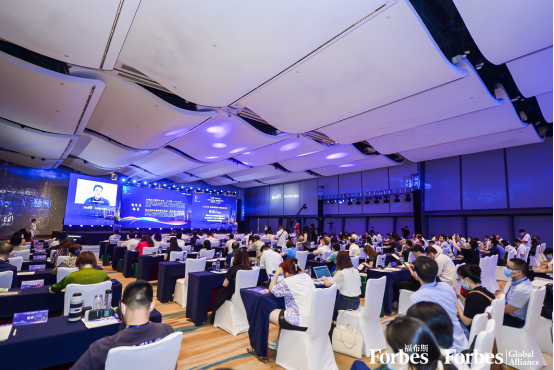 The Forum was attended by Mr. You Xianyong, the Deputy Secretary-General of the People’s Government of Chongqing, also delivered the opening address. He warmly congratulated the successful organization of the Forum, and emphasized how Chongqing had worked closely with Forbes China to aggregate development resources, share in development bonuses and explore new frontiers for development together; this would help Chongqing to accelerate its plans to be a hub for global consumption with impeccable service standards. Through innovation and nurturing of the F&B, hospitality, travel, shopping and entertainment scenes, Chongqing could aspire to be the global leader in driving consumption growth. 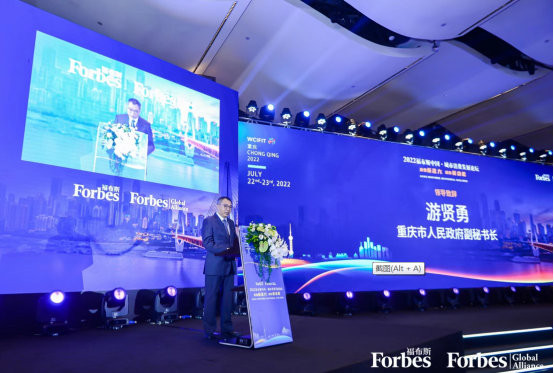 Mr. You Xianyong, the Deputy Secretary-General of the People’s Government of Chongqing, delivering opening address

In his welcome address, Forbes China Group Chairman and CEO Sherman Lee reiterated Forbes China’s long-term commitment to the business environment and development momentum of domestic cities. Driven by today’s regional consumption hubs, more and more cities are displaying new impetus in consumption growth. Mr.  Li expressed optimism that the forum would help elevate Chongqing into a global consumption city hub, magnifying the impact of WCIFIT and expanding the influence of Chinese cities in the global consumption market, in keeping with the new development model of “dual circulation”. 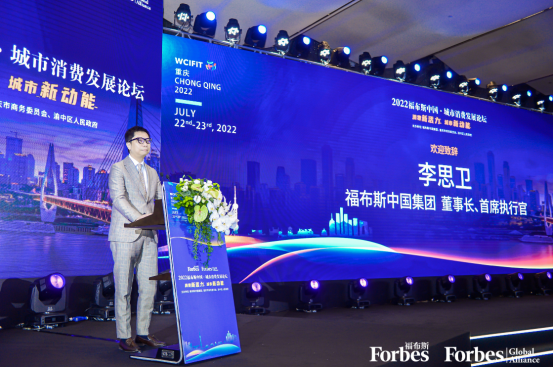 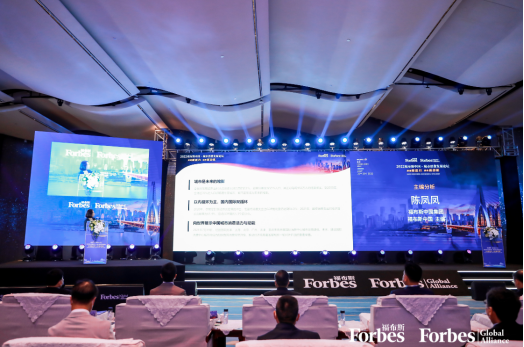 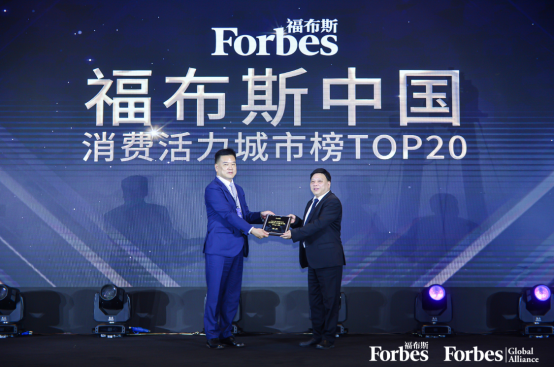 Founding President of the China Institute of New Economy, Lead Researcher of CiNE and President of the Greater Bay Area Institute of New Economy Dr. Zhu Keli delivered the keynote address titled “New Consumer Strategies and New Economic Rules”. Revolving around the keywords of “One Fundamental”, “Two Essentials”, “Three Disruptors”, “Four-Dimensional Integration” and “Five Drivers”, Dr. Zhu shared his thoughts about the key factor that would drive China’s economy towards a smooth transition. He pointed out that in order to develop the New Economy, it was imperative that new value be created that would drive growth and ignite new consumption. 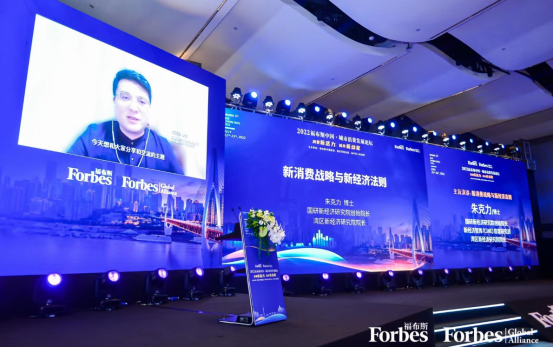 Yusuke Mori, TASAKI’s Board Director & President for APAC region, attended the forum and delivered a keynote address with the theme of “Luxury Goods Trends in China and Changing Consumer Habits”. He provided expert analysis on the current state of the Chinese luxury goods market as well as its future outlook, and also shared some of the development takeaways of TASAKI and AHKAH in China and the Southwestern region thus far. With new consumer patterns emerging, he stressed the importance of catering to changing consumer preferences and different consumer practices in order to navigate the industry successfully. 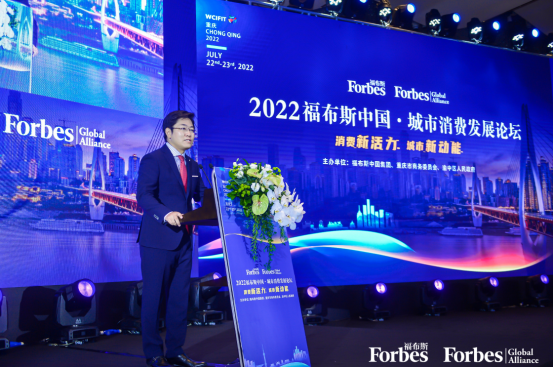 Cai Jinqing, President of Kering Greater China delivered a video address exploring the theme of “Sustainable Fashion as a Driver of New City Consumption”. She shared with her audience several of Kering’s key sustainability projects involving reducing carbon emissions and the use of renewable materials, and acknowledged that the major brands under the Kering flagship were already congregating towards Chongqing and in particular, the Jie Fang Bei CBD, in recognition of its status as a major financial and luxury hub. In the future, Kering would continue to pay close attention to development in the Southwestern region. 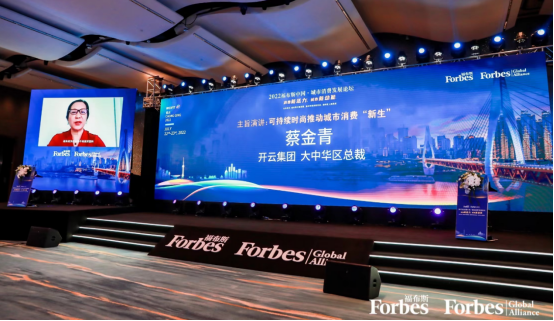 Lawrence Shum, CEO of Galeries Lafayette China, attended the forum and delivered a keynote address titled “Exploring Changes and Transitions of French Department Stores from a Culture/Experience Angle”. He gave a brief recount of the history of French department stores and reaffirmed the Lafayette Group’s commitment to evoking their customers’ sentiments and creating a shopping experience for consumers that seamlessly blends culture and art. In addition, he also shared his thoughts on sustainable development and the digitization of the industry. 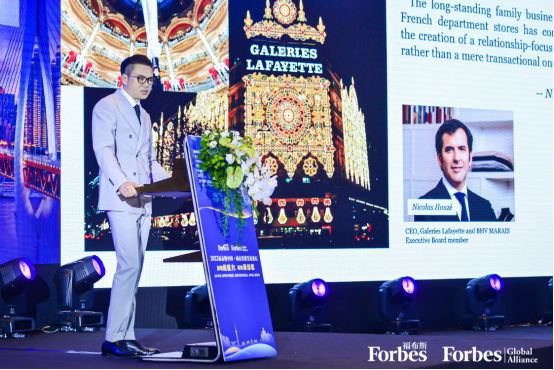 Mr. Huang Maojun, Vice-Secretary of CPC Chongqing Yuzhong District Committee and Chief Executive of Yuzhong District Government attended the forum and delivered a keynote address titled “Developing Yuzhong into a Key Global Consumption City Hub”. He gave a through presentation of Yuzhong District’s general situation and outlined five areas in which Yuzhong was focusing on in its mission to become a key global consumption city hub, namely: “Employ scientific methods in overall design to establish a world-renowned consumption business district”, “Improve business acumen and attract high-end fashion consumer brands”, “Increase speciality scenes and create unique consumer experiences”, “Establish open platforms where businesses can gather for supply and demand” and “Improve the city brand to create a consumption environment that is attractive to all”. 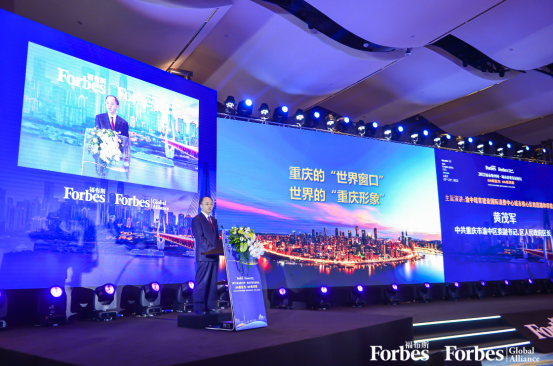 The first panel discussion took on “How Can Chinese Cities Leverage Global Consumption to Obtain New Growth Drivers?”, and an esteemed panel including Chen Shi, Venture Partner at FreeS Fund; Ma Shitao, Head of General Business Solutions at Ant Group; Norman Sze, Deloitte China Vice Chair as well as Ricci Kisembo, INFRA CEO & CMO and partner at Ted Baker and Kiki De Montparnasse. There was a lively discussion where each guest shared their own perspective on the challenges and opportunities facing cities in driving global consumption, including but not limited to the import of consumer brands, digital consumption and investment opportunities in the consumption sector. 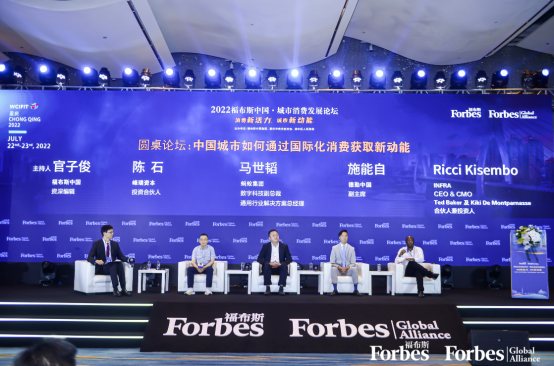 The second panel discussion invited guests representing the four cities that made it onto the Forbes China list, namely Chongqing, Changsha, Qingdao and Zhengzhou. They were in no particular order: Peng Heliang, deputy director of Chongqing Municipal Commission of Commerce; Huang Libin, deputy director of Changsha Municipal Bureau of Commerce; Yin Shigang, director of Qingdao Trade Development Service Center and Li Yingchun, deputy director of Zhengzhou Municipal Bureau of Commerce. There was an in-depth exchange of ideas as the guests discussed the unique features, measures and achievements of their respective cities’ consumption sector, in keeping with the theme of “Expanding and Elevating City Consumption”. 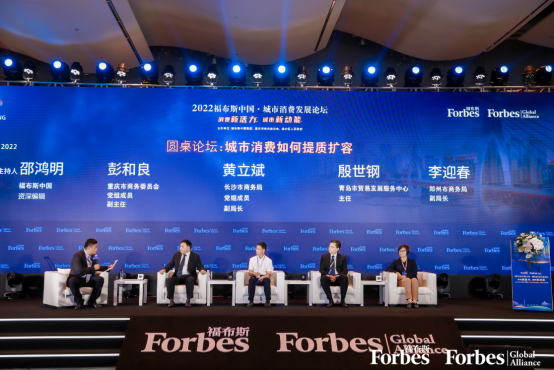 Wu Yingjian, Forbes Global Alliance General Manager, delivered the closing address. She acknowledged that establishing global consumption city centers is key to improving a city’s globalization level, and reiterated Forbes China Group’s commitment to monitoring consumption trends both domestically and internationally, in order to continue providing more valuable consumer information reporting for its readers and promote gradual industry growth. As the official Forbes membership network, the Forbes Global Alliance would also redouble its efforts in helping members who were entrepreneurial leaders in the new consumption industry to grow together. 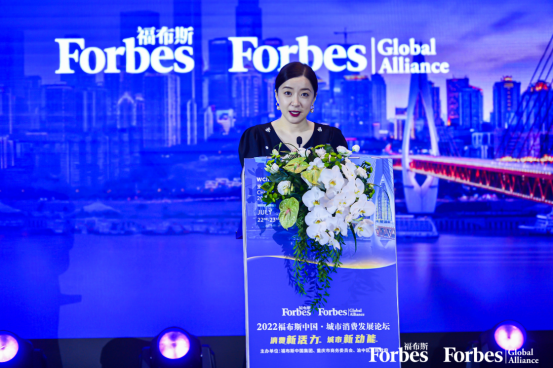 This year’s forum was held at the Jie Fang Bei-Chao Tianmen CBD in Chongqing’s Yuzhong District. With a vision of “Global Perspective, World Class Standards”, Yuzhong District is focusing all its efforts on establishing the Jie Fang Bei-Chao Tianmen CBD as a world-renowned business district. From an international economic hub to a global consumption destination; from a Bashu cultural center to a melting pot for international exchange, this will be the flagship in Chongqing’s accelerated process of building global city consumption hubs.

Leveraging Forbes China’s timeless brand and Chongqing’s unique advantages, this year’s forum was an active part of the 4th WCIFIT that sought to provide a global platform for Chinese cities to improve their global influence, in the process furnishing concrete opportunities for MNCs to deepen cooperation with the Chinese market.