SVGator scales up their SVG animation tool with the new SVG to video export option. Animations can now be exported as high-quality videos with transparency support. 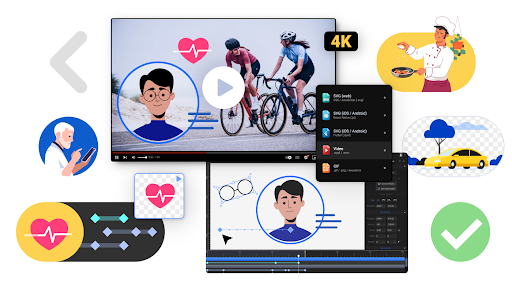 The team behind SVGator announced the release of the tool’s SVG video export feature, changing, and considerably streamlining, the workflow of every visual content creator that animates vector graphics using the app. With this new output option, users are just a few clicks away from exporting lightweight SVG animations as high-resolution videos.

SVGator’s all-in-one lead selling point extends into the launch of this new SVG to video update. Users can animate vector graphics right in the tool’s intuitive interface, and just like exporting to their other file formats (.svg, .js, .dart), to export videos, users don’t need to jump into other 3rd party apps to download a ready-to-use file.

The ability to render videos with up to 4K resolution, at 60 frames per second, right in the cloud, means that the tool does all of the heavy lifting. The end user doesn’t need a performant computer to export their custom animations in one of the five video formats available (MP4, AVI, MOV, WebM, and MKV), even with all settings tuned up for highest quality (2160p resolution – 3840×2160 at 60fps frame rate). 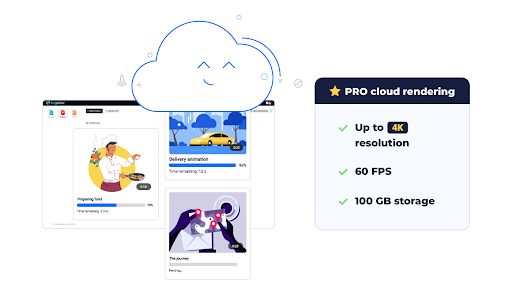 The SVG creator and animator tool has video transparency support, which allows users to render videos with a transparent background or partially transparent elements. Transparency support is a game changer, as it completely eliminates the need to jump through hoops when creating backgroundless animated assets to overlay on footage in more advanced video projects.

Not having to deal with complex background removal techniques, and not having to rely on other 3rd party tools to make custom transparent assets, is a huge time-saving perk. Now, the process of exporting videos with a transparent background is as easy as setting the project background to transparent, exporting the animation as MOV or WEBM, and making sure the transparency option is checked. 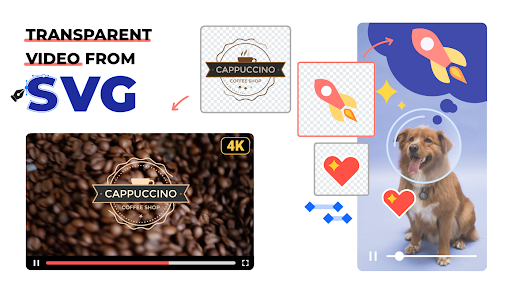 SVG video export was a highly anticipated feature among the SVGator community. “Our in-house designers were just as excited for this release as our user base was. We had to deal with the same obstacle-course workflow when attempting to share stunning SVG animations to platforms that don’t support the SVG format as-is,” says Erika Dosa, SVGator’s design lead.

Following the roll-out of SVG to video export, the exported files can now be easily streamed, embedded, or shared – on social media, in work team projects, on portfolio platforms, in online branding campaigns, and more.

SVGator is a full-featured online SVG animation tool. Emerging as an idea in 2017, the tool was created by designers for designers, and it hasn’t stopped extending its scope ever since. This SVG creator and animator tool was built to explore the performance potential of the infinitely scalable vector graphic format.

The app virtually eliminated the need for coding skills when creating amazing SVG animations, regardless of their complexity level. The team behind SVGator is pushing further development intensely – first by breaking into mobile app animation territory with their 2021 mobile export update, and now by opening the creative floodgates to the widely supported world of video format media.