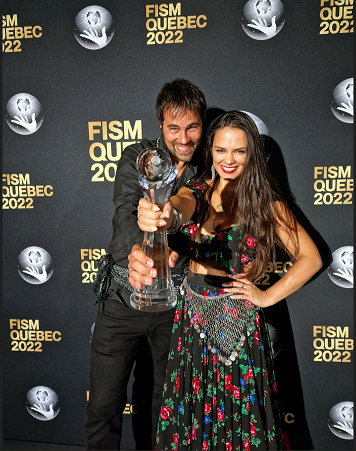 – Anca & Lucca competed at the 28th FISM World Championship of Magic in Quebec City, along with 110 other artists.

– The duo’s brand-new version of their mind-reading act, ‘The Mind-Reading Revolution’ won them world champion status.

In July, the Mind-Reading duo, Anca & Lucca, competed at the 28th FISM World Championship of Magic in Quebec City, Canada, alongside 110 other artists. The pair won the gold medal in the mental magic category, reigning them world champions with the latest version of their award-winning mind-reading act, ‘The Mind-Reading Revolution’.

The artists’ mystically humorous depiction of an ethnic clairvoyant – based on Anca’s Transylvanian heritage – was met with a standing ovation from an audience of 2,000 magicians, and awarded first place by judges. Anca & Lucca never use any secret assistants, electronic devices or pre-arrangements during performances, labelling their shows “mental magic unplugged.” Another unique quality of Anca & Lucca’s work is that it is also available in five different languages: English, German, Romanian, French and Italian.

Since 2015, the magicians have qualified for all FISM World and European Championships and have earned three silver medals, as well as two gold medals across five competitions. This has also earned them the status of being the mentalists with the most FISM medals of all time! The duo’s incredible demonstration of prediction, mind-reading and clairvoyance was re-inforced by the renewal of their notarized $1 million pledge at the World Championship of Magic. Upon returning home to their children in Austria on the 1st of August, the two artists rejoiced: “We are delighted that our decade of work has been recognized again. Winning the gold medal is simply unbelievable!”

Alongside their professional awards and achievements, Anca & Lucca’s backgrounds are equally enthralling and have helped form a foundation for their artistry. The Viennese Lucca has been pushing the limits of mental magic for the last quarter of a century. The couple fell in love in 2011 and the Romanian Anca eventually left her corporate career to pursue a future as a professional magician.

When asked how she felt after winning the world championship title for mental magic, Anca responded jokingly: “Grateful and happy, but I do have one regret – I wish I had had the chance to dance a tango with Pope Francis, a tango aficionado himself, as he was literally metres away from the Congress Centre where the World Championship of Magic took place in Quebec City.”

As a child, Anca had started dancing at the age of 6, beginning a life-long passion for dance. At the age of 18, she considered a corporate or political career path after receiving a flattering letter from Dr. Henry Kissinger, for her correcting remarks on his book entitled, “Diplomacy”. At the time, she was studying a double major in International Relations and Business Administration, which led to her eventually becoming a business consultant; all the while simultaneously performing at competitions as a ballroom dancer.

Lucca is an artist and philosopher at heart. He has always been purposeful and driven in his intent to create masterful magic, alongside a deep interest in politics. Both Anca and Lucca are avid believers in defending human rights, especially when it comes to the emancipation of women. The pair have together crafted a new realm in telepathy, where the woman is no longer the assistant of the ‘master’.

Anca & Lucca’s love story, along with their journey of working together, are the main themes of Lucca’s book, entitled, “The Art of Amazement”. These themes form the foundation of their theatre show, ‘The Mind-Reading Revolution’, with which the duo plan on touring for an English-speaking audience.

Find out more information about upcoming shows by Anca & Lucca, here: The Mind-Reading Revolution or follow them on Youtube